Marion Bartoli is in the place! 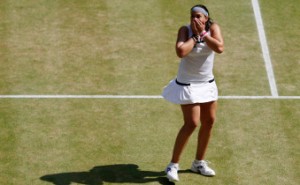 13 years after Amelie Mauremo, another French tennis player (finally) won the Wimbledon Championship! Yes Marion Bartoli did it thanks to a 6-1, 6-4 win over Sabine Lisicki! And who cares if she did not cross the road of the tournament favorites, the important thing is to reach the final and win it! This is done, and her name will ever been engrave next to the others winners, like Serena, Venus Williams, Maria Sharapova, Lindsay Davenport, Steffi  Graf, Martina Navratilova… class !

If she did not have only good moments in her career, today her motivation, determination, the hard work and her talent have finally paid and it is well deserved. Congratulations Champion! Smile on her face, Louboutin heels on foot, Marion Bartoli celebrated her biggest career victory and YES she is pretty! Because whatever if she “never going to be somebody like a Sharapova, never going to be 5ft 11, never going to be somebody with long legs”. Some may have forgotten, one in particular (don’t feel concerned Mr John Inverdale), but Wimbledon grass is not a model parade: small, big, brown, blond… All players have their place on the center court.

“It doesn’t matter, honestly. I am not blonde, yes. That is a fact. Have I dreamt about having a model contract? No. I’m sorry. But have I dreamed about winning Wimbledon? Absolutely, yes.” In addition to winning the trophy of the tournament she won the trophy for the best answer. Marion you are more than a “looker” you are a great person and a tennis Champion!

What is next? US Open? And maybe one day at home in Roland Garros? Only she knows, but the story has just begun.