The British Underdogs keep on barking! 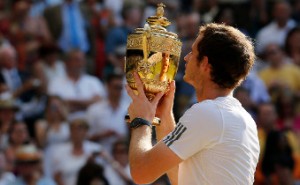 Is it a flash in the pan or is it here to stay?………have British sportsmen and sportswomen finally found the key to success on the global stage or are we just going through a purple patch. Well,  Andy Murray finally put an end to the 77 year wait for a British men’s singles title this month. That will be hard to top for a while but surely we won’t be waiting another 77 years for our next winner and I wouldn’t be surprised if Andy won it for the next few years……you know what they say about London buses!….and all good things…

It all started to take off in July of last year with the incredible achievements of a British man, born in Belgium who at his first time of wearing  the yellow jersey went on to win….yes the arising  star was Sir Bradley Wiggins and the Tour De France,  who would have predicted he’d become as famous as that most famous of Belgians, Eddie Mercx but such is the huge interest in cycling now in the UK, Bradley become an overnight hero. Now the ownership and prowess of this event has been stolen away from our European neighbours (perhaps never to return as Chris Froome takes up the Peleton in 2013).  The cycling success continued in the August Olympics along with so many other fantastic achievements with medals coming thick and fast in all colours but with Gold appearing with incredible regularity. Even more heady days of success were to follow for the Brits in the Paralympics where such was its popularity that it was a sell out event.

In New York last September it was the US Open Tennis where we found glory. The hard court with its surrounding steeply packed seats, boxes and private suites making up an all blue arena. Murray met Djokovic in the Final and after a marathon match and at his 5th attempt to win a major, the steely Scotsman at last won his historic battle.

What are we driving at here?……oh yes I nearly forgot, the Golf…..in a year where Rory Mcilroy won the US masters and a few Brits were instrumental in retaining the revered prize of the Ryder Cup and in Uncle Sam’s back garden. But to top it all in 2013 Justin Rose showed true grit and determination to become the first Englishman since Tony Jacklin to claim the silverware in the US Open. And now in July 2013 at The Open at Muirfield, can he or another British hopeful like Donald, Westwood or Poulter join the tee time party.

In Cricket there was success in the Test series in India after losing the number 1 spot to South Africa earlier in the year and now there follows back to back Ashes series in England and Australia which England are hot favourites to win both. And so to 2013 and staying on the Australia theme rugby fans witnessed an amazing series victory for the British & Irish Lions which after the spoils were shared after the first 2 matches thrilling and nail biting finishes, culminated in a fair old thrashing in the 3rd and Final Test.  And in October the GB Rugby League team have the chance to take the world crown and on home soil.

But what of our association with football success and the Football Association’s England Team?…….we have the finest quality Premier League with the best players and viewers in their billions around the globe. But for some reason we can’t find anything remotely indicating success from England or any of our other British teams on the international stage. We can’t even win the right to host the World Cup tournament, never mind get anywhere close to winning it. But have faith and look forward to Brazil……stranger things have happened  when all at sea and we do thrive on being the British bull underdog. Can the cross of St. George be draped in glory across Copacabana beach next July?……remember it’s not all over until the girl from Ipanema sings!!