As we approach the start of the European leg of the Formula 1 calendar at the Circuit de Catalunya-Barcelona, we’d like to reminisce back to March for our inaugural FAM trip to the F1 winter testing in Barcelona.

Touching down in Barcelona

For our first FAM we wanted to show the clients all that Barcelona has to offer in terms of sporting action – and we definitely chose the best time for it.

We landed the day after Barcelona took on Paris Saint-Germain at home, with a devastating first leg loss and needing a miracle to make it through to the next round. That miracle happened with three goals occurring in the last five minutes, and the score line finishing at 6-1.

When we touched down in Barcelona – following slight delays thanks to French air traffic control – we arrived to sunshine and nine eager agents looking forward to exploring the city.

We were staying at the Gran Hotel La Florida, on the outskirts of Barcelona overlooking the city. It was an amazing way to experience the hustle and bustle of city life during the day, and then retreat for a relaxing night in the Tibidabo Hills.

A visit to the Nou Camp

Our first sporting stop on this fleeting FAM was at the Nou Camp itself, the home of the greats of European football. 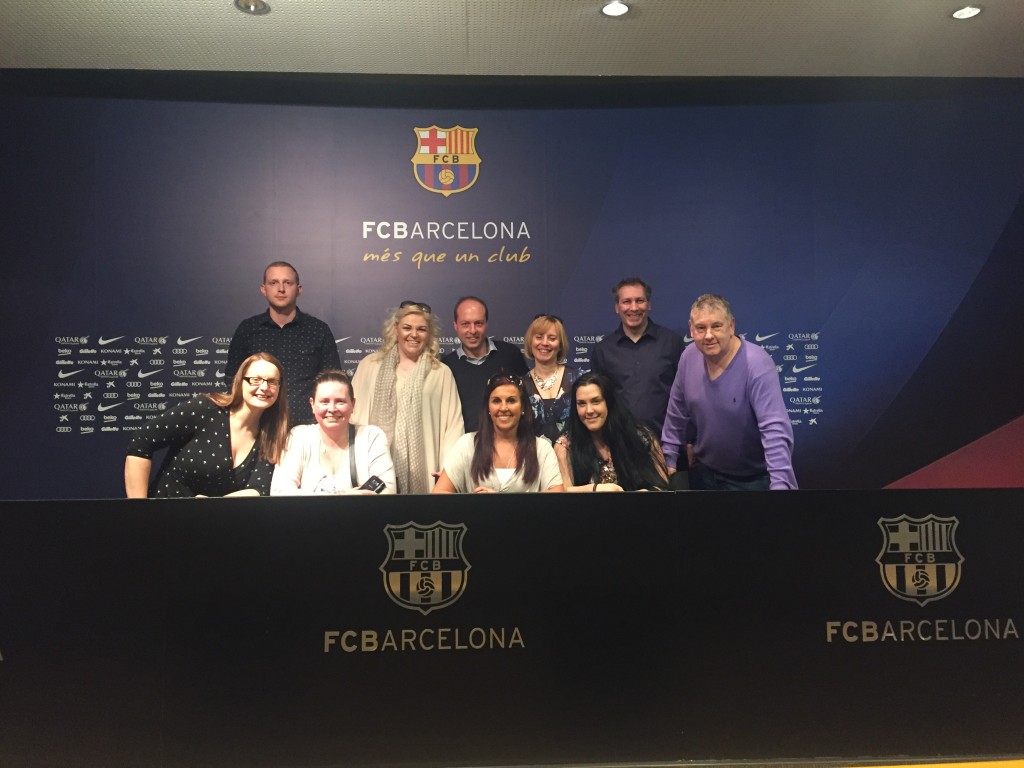 In our VIP tour we had a private guide explaining all the fun and interesting facts about the stadium, players and the club itself. With some great pictures in the press conference room and pitchside, and a view from the director’s box, this was a special VIP behind-the-scenes tour for our agents. 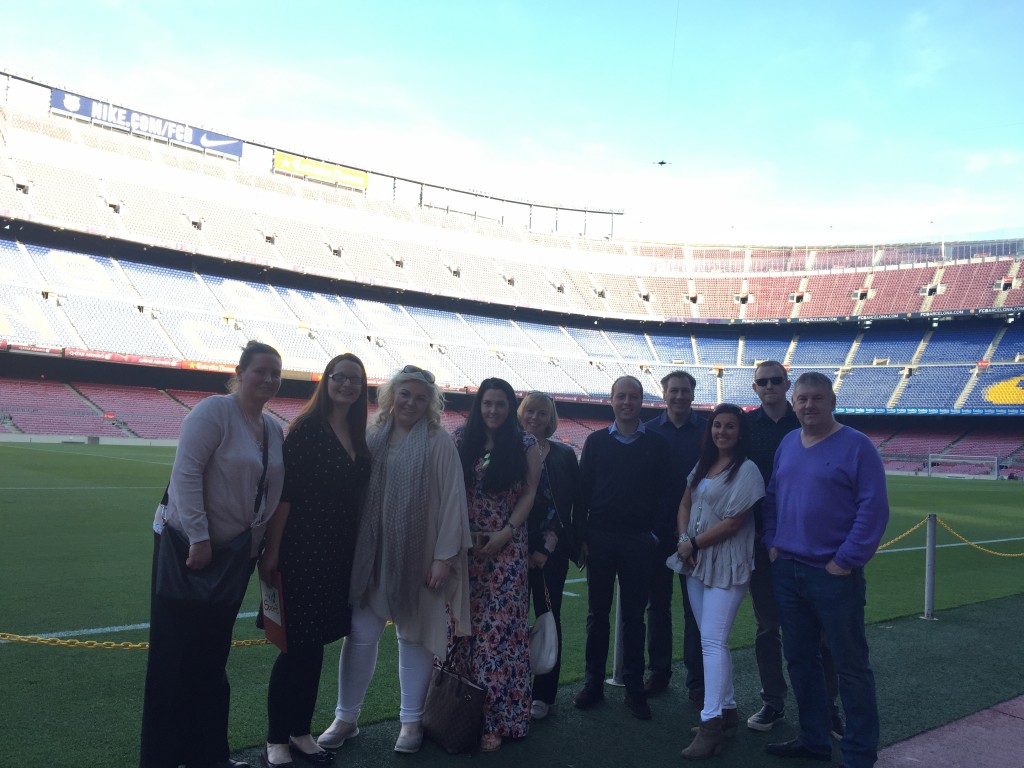 Next we had a divine twist on ‘Tapas Afternoon Tea’ at the Majestic Hotel, which is situated in the heart of Barcelona in the elegant area of Paseo de Gracia and surrounded by luxury. It’s an amazing place to stay if you want a break of pure indulgence.

After our exquisite dinner we headed back to the hills of Barcelona for a restful sleep before the delights of the next day at the circuit for the F1 testing.

We set off to the circuit bright and early after sorting some more issues with the French air traffic control strikes, meaning we had to stay another glorious night in Barcelona. The Circuit de Catalunya-Barcelona is situated about 40 minutes drive from the city centre, in the small town of Montmelo.

Our day at the circuit consisted of Piso Box hospitality, which is situated just above the team garages so you can feel the noise vibrating through your body during a pit stop test. 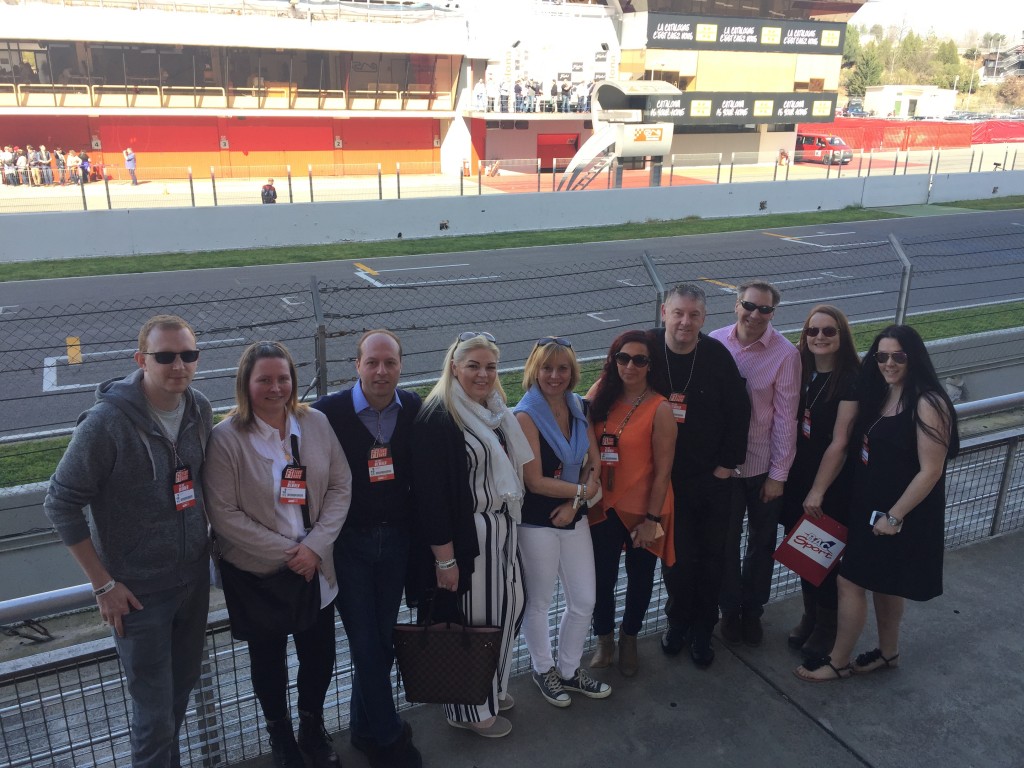 We started the day with drinks and canapés and a tour of the hospitality areas of the circuit so that the agents could see what to expect on a Grand Prix day in terms of views and expectations for clients.

Next we moved on to a service road tour – not something that the everyday F1 fan will experience – but you drive along the service road alongside the F1 cars as they race around the circuit. This is the closest you can get to an F1 car during an event on the track, so it was an amazing experience for our agents.

Following on from one great experience to the next, we had a walkthrough of the Paddock area. This is the hosting area for all the F1 teams’ motorhomes and technical equipment, including their hundreds and hundreds of tyres. It’s also the place where the Q&As with the media happen and the drivers chill pre- and post-racing.

We stopped for some lunch in the hospitality room whilst watching the last of the testing before they broke for lunch as well. 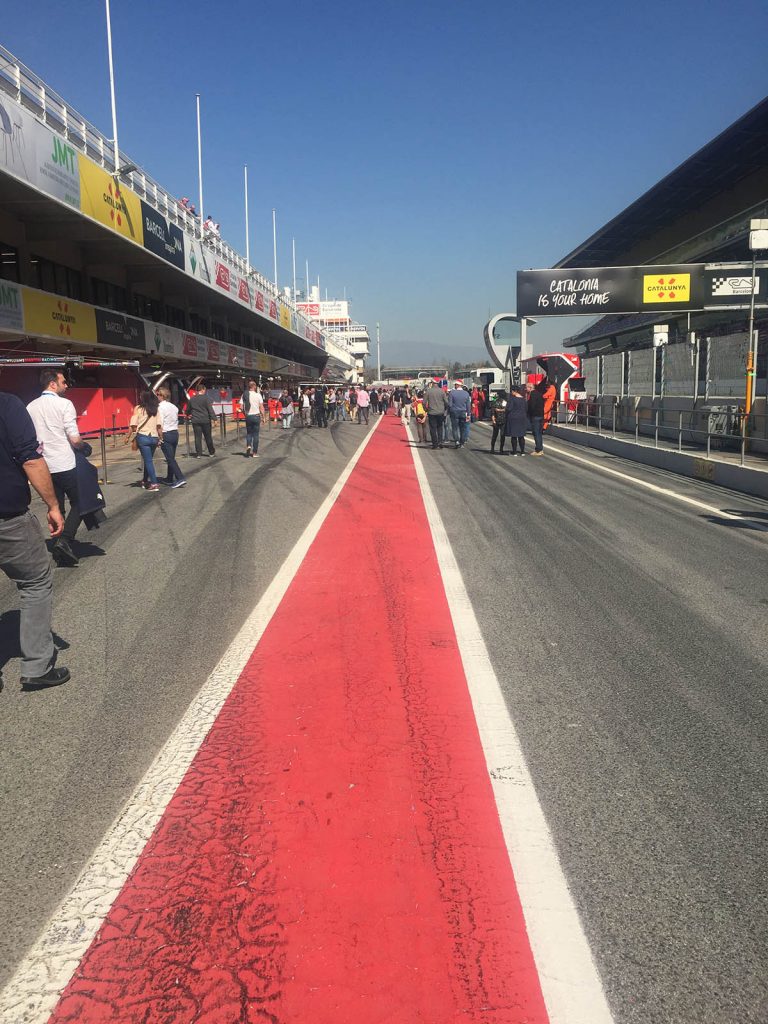 There were some fast times as it was the last day of testing before the Australian Grand Prix, and the drivers on the circuit included Lewis Hamilton, Kimi Raikkonen, Sergio Perez, Fernando Alonso and Valtteri Bottas to name a few.

We indulged in some great food provided by the circuit from the Fairmont Juan Rey Carlos and grabbed a glass of cava or two to wash it all down.

The final element of the testing was the pit lane walk, which on an F1 weekend is normally the place to be seen amongst the hustle and bustle of the teams getting ready to race. However, on a testing day you see it more open, as no one wants to give away their secrets too early.

F1 winter testing in Barcelona: a trip like no other

The highlight of the trip for a lot of the agents was the F1 day, and it’s something we love to host as a company. Attending the F1 winter testing in Barcelona gave the F1 fanatics the chance to really get close to the action and understand the cars – access you just cannot get during an F1 Grand Prix.

All in all the inaugural BAC Sport FAM trip was a success, with some additions that, although unplanned, made the trip just that much better. We thank our suppliers for assisting us with this trip and hope the agents involved had a great time and enjoyed themselves as much as we did.